By Karen B. Shea on November 28, 2016 in Animals, Children’s Book, Mountain Beavers, Nature

My Inspiration for writing the children’s book Clark the Mountain Beaver!

When was the last time you were transported to being a kid again? You know, when you have that feeling of wonder and pure delight? Those exciting feelings associated with being a kid! 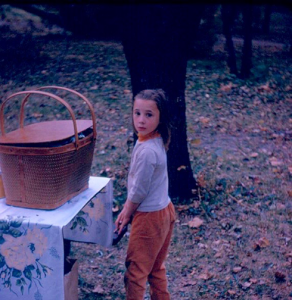 Okay, in this picture I was 7 or 8 and probably just got caught trying to nab some cookies from the picnic basket, but that can be an exciting feeling!

If you’re like me, those moments are few and far between. Which is why when they happen, you take notice. The last time I found myself transported to that place, it propelled me into an unknown world! I’m talking about writing a children’s book!

Yes, Clark the Mountain Beaver and His Big Adventure! was the result of reconnecting with that childhood wonder. 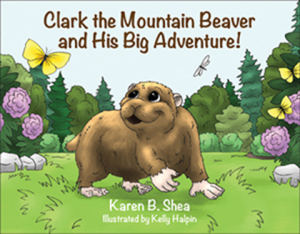 It was all so innocent! There I was wandering around my yard on a peaceful autumn evening. I love my yard! It is a magical place with beautiful rhododendron bushes; evergreen trees that reach to the sky; a quaint little creek; and lots of critters. Being a nature lover, I was very familiar with the various critters that called my yard home. Or so I thought!

On this night, a mystery critter appeared.

As I stood on the bridge stretching over the creek, I glanced down stream and there it was – a little brown critter with tiny ears, a stumpy tail, and short legs. But what was “it”? 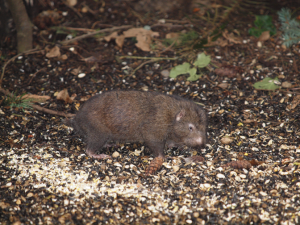 My experience told me it looked like a muskrat but it had no tail. Muskrats have tails. Was I discovering something entirely new or just new to me? It really didn’t matter because the excitement of this newfound discovery lit me up inside like a Christmas tree!

The mystery was solved a couple days later when I went to work at PAWS as a volunteer at their wildlife rehabilitation center. Our daily briefing began with, “We received a mountain beaver with mange so please do not disturb him today.” I responded with, “A mountain beaver! What the heck is a mountain beaver?”

My first known encounter with a mountain beaver.

As my supervisor escorted me back to where the mountain beaver was being isolated, she slowly lifted the lid to its temporary enclosure and there right before my eyes was the exact same brown bundle of fur I saw cruising along my creek! I never heard of a mountain beaver before. After being handed a huge book on mammals to read up on them, my questions were soon answered and I became their number one fan!

The more I learned, the more I realized my neighborly mountain beaver had been leaving me signs of his presence all along. Signs such as gnawed off branches left behind as if someone left in a hurry; large cascading mounds of dirt appearing out of nowhere; and the biggest one, numerous holes throughout the hillside, all of which I blamed on the local opossums. Just how long has this critter been living under my feet, literally, without me even knowing it?

See what I mean about being transported to being a kid again? The curiosity kept me going and oh, how exciting to discover a new critter after almost fifty years of living life! Clark (I will soon explain how he got his name) was about to become my new best friend and a journey into the literary world was about to begin!

Now you tell me, “When was the last time you were transported to being a kid again?” 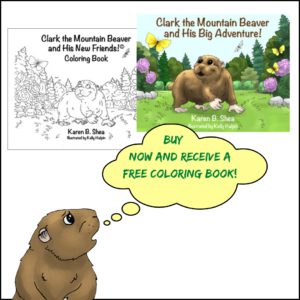 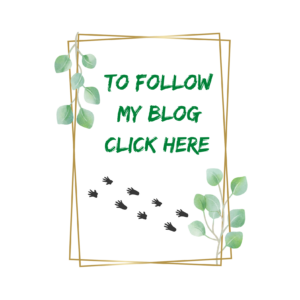 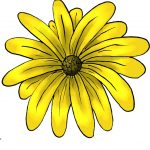